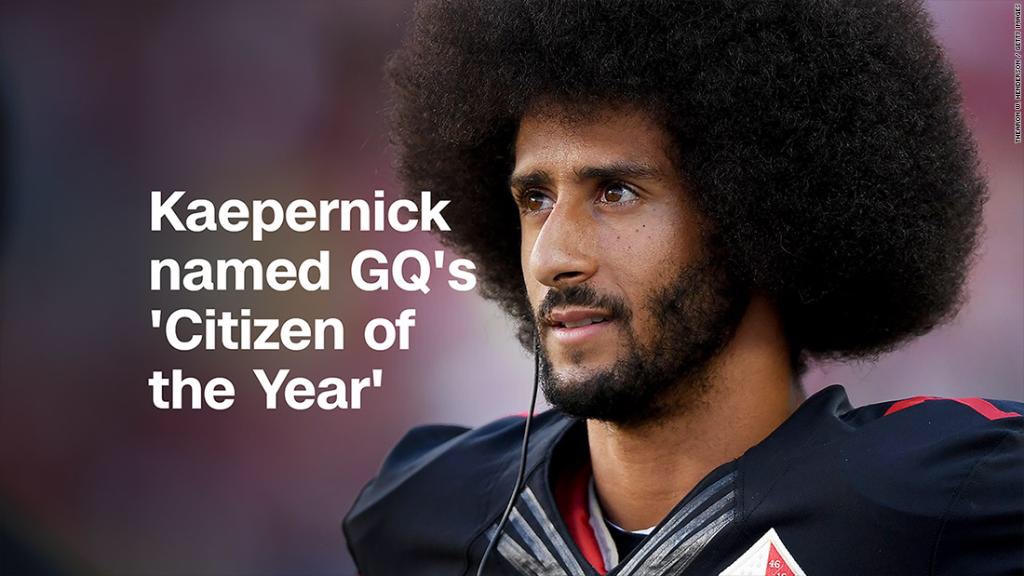 Being from Phoenix, I’ve always been an avid Arizona Cardinals fan. I still ride hard for them to this day, although this doesn’t appear to be our year. As a Cardinals fan, I used to strongly despise Colin Kaepernick. He began his career OWNING us, going 3-0 against the Cardinals until we fought back to close the gap (he’s currently 4-3 in his career vs. AZ). How did this kid fresh out of college come into the league and start picking us apart? HOW SWAY?! I had the Kanye moment way before it occurred. Then came Super Bowl XLVII, better known now as the Ray Lewis retirement bowl, which lived up to its billing with a last second stand by the Ravens to pull it off. People don’t remember, but Kaepernick was that good. It took a final push by the Ravens, and a defense led by arguably one of the greatest defensive football players of all time, to beat this 2nd year dual threat of a quarterback and keep the Vince Lombardi trophy out of his hands. Damn! To come that close to a Super Bowl victory in your second year as the starting quarterback stings! Most would have assumed that it also meant that it wouldn’t be long before he would get another shot in the Super Bowl and win it. Right? …Wrong!

What followed for Colin Kaepernick was a rollercoaster of events. In 2013, Kaepernick performed on a level similar to that of his previous Super Bowl run. This effort earned him a trip back to the NFC championship game. Unfortunately, this time he did not make it out. Kaepernick lost to the Seattle Seahawks, 23-17 on a last minute interception. This probably stung a bit worst than the Super Bowl loss. It didn’t seem like it would be so at the time, but that interception was his last NFL playoff throw. After signing a six-year extension, worth about $126 million, all seemed to be going well. Then, there was a change of coaches, a few injuries, and the restructuring of his contract. This set the stage  for the controversy.

During the 2016 preseason, Colin Kaepernick decided to sit down during the national anthem. He explained:

“I am not going to stand up to show pride in a flag for a country that opposes black people and people of color. To me, this is bigger than football and it would be selfish on my part to look the other way. There are bodies in the street and people getting paid leave and getting away with murder.”

Kaepernick’s decision came less than a month after the officer involved shooting deaths of Alton Sterling and Philando Castile. Both incidents were caught on tape, and although one was streamed on Facebook live, officers were cleared in both cases. What are the odds? Colin Kaepernick, an individual who exercised his right to peacefully protest, faced more outrage from mainstream America than individuals who actually committed crimes or stood against the law enforcement. This outraged remained even though Kaepernick clearly explained that his protest was not against cops or the military, but instead against the social injustices in our country. His goal was to start a conversation,   which he did, but many changed the topic and altered the message.

As the protest poured into the 2017 season, Kaepernick faced more consequences for his decision. His decision to take a stand and speak out began to affect him financially, and would prove to shorten his career. He was “blackballed” from the NFL! Although no one has come out and admitted it outright, it is clear that owners have decided to look elsewhere when considering to sign a quarterback. Questions have begun to pore in such as “Is Colin the same quarterbacks he was in 2012?” Maybe not. However, many would easily concede that he is better than every backup quarterbacks in the league. I’d go as far as to say he’s better than about eight starting quarterbacks right now!

There are a few others that can be added to that list. The NFL has successfully swept this travesty under the rug all season long, and you can always count on one analyst to try and sell tickets to the “its a performance issue” excuse show. In the words of the great Chad Johnson, “Child Please!”

In addition to being blackballed, Kaepernick has faced criticism from political figures (cough, cough), and has received death threats. The pressure he has faced would be a deterrent for many, and would influence (or coerce) them to give up their mission. But Colin Kaepernick has proven himself in the face of intense pressure and doubled down. He has been unapologetic about his stance, and one can say that he has emerged as a modern day Muhammad Ali type figure for children of all races worldwide. Kaepernick should be commended for making the unpopular choice. He’s put his livelihood on the line, while donating his own money, and stood in the face of the opposition, refusing to back down, in order to be the voice for those who don’t have the stage to let their voices be heard. Whether you agree with Colin Kaepernick’s views or not, it is a given that he deserves to be the GQ Citizen of the Year.